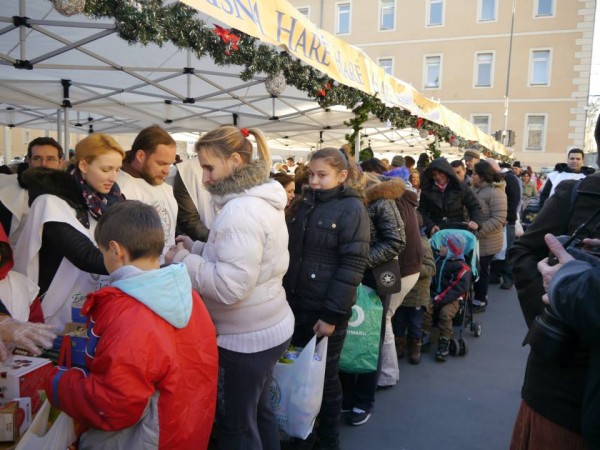 During the month of December, ‘Food For Life Hungary,’s charity program, distributed 30 tons of dry food (rice, flour, oil, pasta, and canned vegetables) as well as 30,000 hot plant-based meals to the needy all across the country.

Over 5,000 plates of prasadam was distributed on December 24-25-26 in Budapest. Thousands lined up in Budapest to get food from Food for Life Hungary.

The ‘Christmas packages’ that the volunteers gave out in 12 locations around the country were the only source of food for many families during the cold winter and holiday season.

According to surveys, in Hungary there are about 250,000 children living under the poverty line. During school season every student in the country is being provided free food by the government, but during the two weeks of the winter holidays the under-privileged children are deprived of hot meals and adequate nutrition. 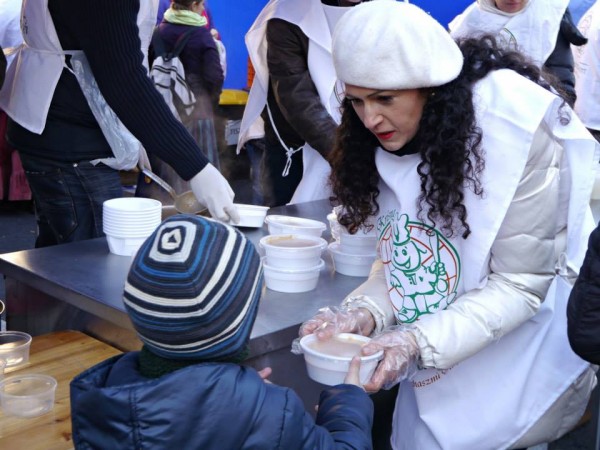 This year, FFL Hungary decided to step in and take care of the needs of these children. Besides the hot meals, the packages for each family contains enough ingredients to cook meals for weeks. To help share the Christmas joy all the children received candies, toys, crayons and other presents from the volunteers.

Every year many celebrities join Food for Life Hungary for the Christmas food distribution and this year was no exception, with mayors, parliament members, rock stars, television hosts, athletes, journalists, singers, composers and other artists all helped to hand out the free lunches and Christmas presents to thousands of needy families.