What will you do today?

Today marks the anniversary of one of the most famous and influential men of the modern era, Mohandas Karamchand Gandhi, born October 2, 1869.

Gandhi was the preeminent leader of Indian independence movement in British-ruled India. Employing nonviolent civil disobedience, he led India to independence and inspired movements for civil rights and freedom across the world. Today he is still revered for these actions and is most often associated with all kinds of movement and causes for peace, animal right and vegetarianism.

Many people are unaware that the Russian philosopher Leo Tolstoy was a key influence in Gandhi’s life. He once wrote “A Letter to a Hindu,” in which he said that only by using love as a weapon through passive resistance could the Indian people overthrow colonial rule. In 1909, Gandhi wrote to Tolstoy seeking advice and permission to republish his “A Letter to a Hindu” in Gujarati. Tolstoy responded and the two continued a correspondence until Tolstoy’s death in 1910 (Tolstoy’s last letter was to Gandhi). The letters concern practical and theological applications of nonviolence. Gandhi saw himself a disciple of Tolstoy, for they agreed regarding opposition to state authority and colonialism; both hated violence and preached non-resistance.

Most recently, there has been a campaign spreading through social media for people to fast today in memory of the tens of billions of animals killed ever year. Although this is certainly noble, the question must be asked: Is that the best we can do? Will this actually help? My feeling is it won’t have as much impact as people assume. Simply because the powerful corporations that run this world will continue pushing for more and more animal agriculture and one day of lower sales is not going to halt that momentum.

So I propose we do more than just fast, which is essentially inaction. Why not support causes like Food for Life and Paramatma Animal Sanctuary that are taking action to change the way people eat and think about food. Here is your check list today. The more ticks you add here, the greater your actions will be today in creating the peaceful world men like Gandhi and Tolstoy dreamed about. 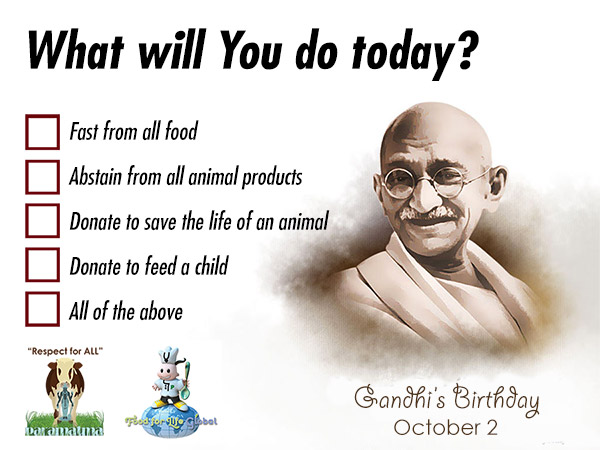