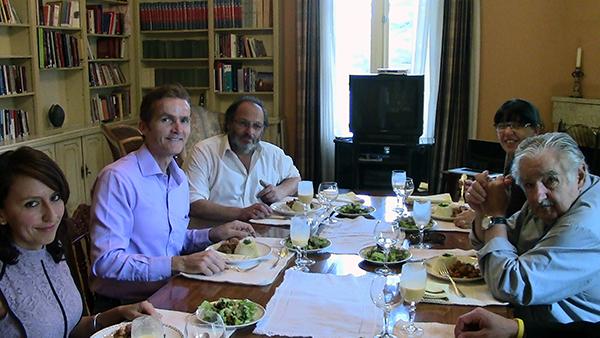 Voted the best president in the world, President of Uruguay, Jose “Pepe” Mujica agreed to allow Food for Life Global director, Paul Rodney Turner to cook him a vegan lunch and then discuss setting up a Food for Life project in Montevideo.

“FFLG Coordinator for South America, Juliana Castaneda and I arrived at the Presidential house at 8am. The kitchen staff were waiting for my directions. We were also joined by a local volunteer. The three of us made a sweet potato, spinach curry with bbq tomatoes, lemon rice, samosas, mango chutney, chapatis, lentil soup, avocado salad, and a mango/coconut milk lassi made by Juliana that he was absolutely thrilled by. We finished off the meal with the most incredible peppermint vegan ice cream choc-top pie! Yes, that was what you have to do when you cook for a president!

“According to the house staff, this was the first time anyone has prepared a vegetarian, what to speak of a vegan lunch in the president’s house. They were all so excited and the head chef was furiously taking notes on all my recipes.

Everything went like clockwork. By 12 noon all the preparations were complete. I was told that the lunch would be served at 12, but actually, it was not served until 12.40. I put together a sampling of all the things we made and had all the cooks come together with me and did an offering meditation over the food to bless it with nice energy. The local staff watched on and were really impressed.

“We then dined with the president, his secretary, the minister of social development, Mr. Daniel Olesker and our friend and famous sports reporter, Pepe Mansilla, who will be the new president of FFL Global Uruguay. We are so thrilled to have such a qualified man to lead the new project. Our lunch meeting went for 2 hours and included a 10-minute video of Food for Life’s work around the world. Juliana was absolutely on fire today talking to the president and making him smile and laugh. I was so proud of how she and Pepe represented Food for Life Global to the president, who only speaks Spanish.

In fact, our meeting would not have been possible without the tenacity and devotion of Pepe Mansilla He had been working on this desire of mine for many months and finally on the day before we are to leave Uruguay, he made it all happen. He is a gentleman and we are so excited to have him as a new member of the FFL Global team. 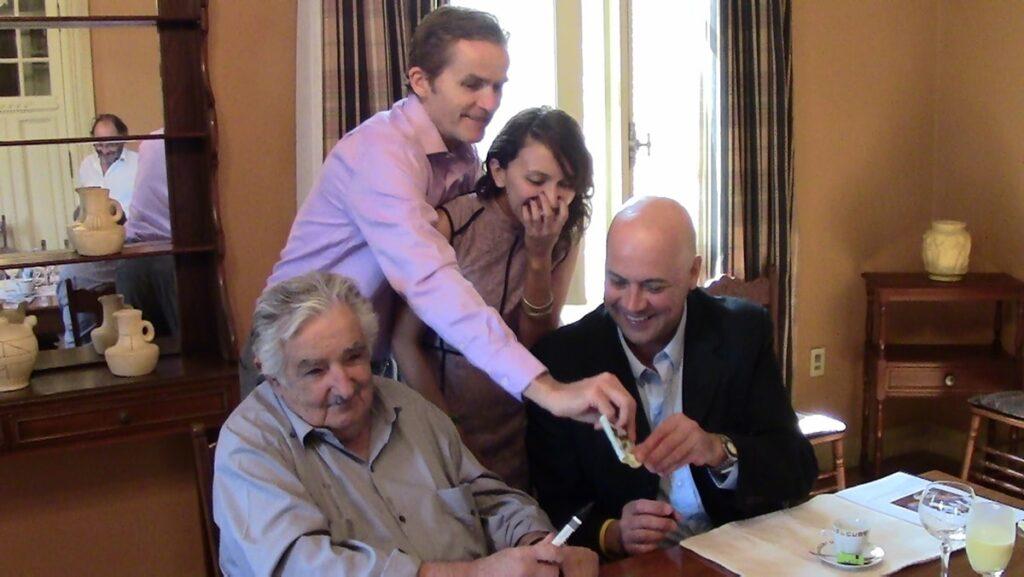 “The president was extremely impressed and praised our work throughout the meeting. He said to me: “Many people need education about the way they eat.” And he told me bluntly, “Welcome, the doors are fully open here for Food for Life.” The Minister of Social Development told us, he wants Food for Life to improve on what the government has been working on for years with improving the quality of meals to children.

“We finished our meeting with the president signing autographs for all of us with a smile and some words of wisdom. I told the president that he is one of the few, if not the only president alive today that has integrity. It seems that all of the presidents of the world have sold out to corporate interests. “I wish there were more of you,” I told him. He replied, wow all those presidents must be really bad if you want more of me.

“President Mujica is an extremely humble and endearing man. We felt very welcome and encouraged by the presidents’ enthusiasm to serve his people. Juliana noted that at one time during our conversation the president was talking about his tomato sauce recipe,  and then said, “Tomatoes are so expensive,” indicating to her that he is actually aware of such trivial things. Most presidents are oblivious to the struggles of budgeting for meals, etc, but the president is aware and expressed his empathy for the challenges of his countrymen. “For me it just validated my respect for this wonderful man,” said Juliana. “He actually sells his own tomatoes in the market place. He is such a down-to-earth man.”

“President Mujica was particularly excited to learn that Food for Life likes to support  the local economy by purchasing food and grains from local sources. “This is important. We need to support our small farmers. They are good people but not always good in business. So it is important for the government to support their efforts. I like Food for Life’s attitude on this.”