“No one within ten miles of our temple should go hungry.” Swami Prabhupada

No One Should Go Hungry

Is anybody hungry? Please come to my home, where my wife has prepared a meal. We have enough to feed 20 hungry men. She has prepared the finest rice, curry, and puris (fried bread). I will not take my meal until I know that every man, woman, and child is fed. 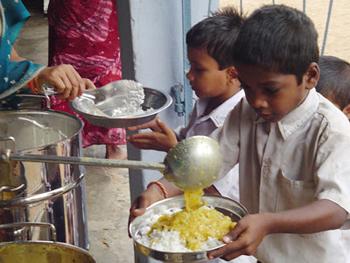 Such selfless gestures of hospitality were common in the village life of ancient India. The religious householders of the Vedic times saw themselves as providers for all living beings, including the animals. No creature was allowed to go without food during the pinnacle of Vedic civilization. This is the fertile ground in which the seeds of Food for Life’s philosophy were sown.

The Meaning of Hospitality

According to the Oxford Dictionary, hospitality is “a friendly and generous reception of guests or strangers.” To be hospitable, therefore, means to care and show respect for another being. It is a sincere expression of appreciation, love, and humility. A person whose heart is filled with gratitude, magnanimity, and spirituality is naturally hospitable. 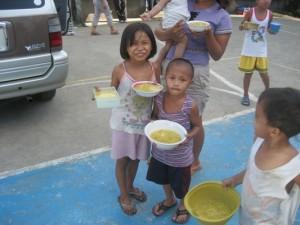 It’s important to note that hospitality is not the same as entertaining, which is, unfortunately, the more common approach today. When we entertain, we put all of our efforts into the event—the appearance of the home, the rich, high-calorie/low-nutrient food and refreshments, and seating and table settings. We judge the success or failure of the event by such unimportant details as whether or not the soufflé fell or the ice ran out. In contrast, hospitality focuses on the comfort and wellbeing of guests; the desire to freely share one’s home; the nutritious, life-giving food that is prepared; and above all, the people. In her book, Gluttony, the 7 Deadly Sins, Francine Prose notes:”In the Greco Roman tradition, feasting along with drinking was the social cement that enforced the values of the citizen and kept the state together. Good feasts and bad feasts are reoccurring motifs at the center of the Odyssey, where it is made very clear that the worth of the host depends upon the generosity of his table.”Some hosts put so much energy into preparations for entertaining that they have little left for their guests. By the time the guests leave, the host is exhausted. Hospitality, on the other hand, is physically and spiritually refreshing and nourishing. Simply put, entertaining is fueled by pride, while genuine hospitality arises from humility. Genuine hospitality does not distinguish based on species, race, caste, creed, or color; these differences are meaningless from a spiritual perspective. Rather, genuine hospitality welcomes all with a loving embrace. For an example of profound hospitality, one need not look any further than the example of King Rantideva of India’s Vedic tradition.

The Story of King Rantideva

Rantideva never endeavored to earn anything. He would enjoy whatever he received by providence, but when guests came he would give them everything. Thus he, along with the members of his family, endured considerable suffering. Indeed, he and his family members shivered for want of food and water, yet Rantideva always remained sober. Once, after fasting for forty-eight days, in the morning Rantideva received some water and some foodstuffs made with milk and ghee, but when he and his family were about to eat, a brahmana (priest) guest arrived. 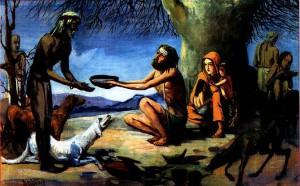 Because Rantideva perceived the presence of the Supreme Godhead everywhere and in every living entity, he received the guest with faith and respect and gave him a share of the food. The brahmana guest ate his share and then went away. Thereafter, having divided the remaining food with his relatives, Rantideva was just about to eat his own share when a sudra (field worker) guest arrived. Seeing the sudra in a relationship with the Supreme Personality of Godhead, King Rantideva gave him also a share of the food. When the sudra went away, another guest arrived, surrounded by dogs, and said, “O King, I and my company of dogs are very hungry. Please give us something to eat.” With great respect, King Rantideva offered the balance of the food to the dogs and the master of the dogs, who had come as guests. The King offered them all respect and obeisance. Thereafter, only the drinking water remained, and there was only enough to satisfy one person, but when the King was just about to drink it, a candala (outcaste) appeared and said, “O’ King, although I am low born, kindly give me some drinking water.” Aggrieved at hearing the pitiable words of the poor fatigued candala, Maharaja Rantideva spoke the following nectarean words: I do not pray to the Supreme Personality of Godhead for the eight perfections of mystic yoga, nor for salvation from repeated birth and death. I want only to stay among all the living entities and suffer all distresses on their behalf so that they may be freed from suffering.By offering my water to maintain the life of this poor candala, who is struggling to live, I have been freed from all hunger, thirst, fatigue, trembling of the body, moroseness, distress, lamentation and illusion. Having spoken thus, and although on the verge of death because of thirst, King Rantideva gave his own portion of water to the candala without hesitation, for the King was naturally very kind and sober. Suddenly, out of thin air, great demigods (devas) like Lord Brahma and Lord Siva, who can satisfy all materially ambitious men by giving them the rewards they desire, then manifested their own identities before King Rantideva, for it was they who had presented themselves as the brahmana, sudra, candala and so on. (Bhagavat Purana 9.21.2-15)The great demigods had tested the King for his level of tolerance and compassion and the great King succeeded and thus received their blessings.