India is the home of not only vegetarian cooking but also the science of healthful living. The section of the Vedas known as the Ayurveda is the oldest known work on biology, hygiene, medicine, and nutrition. Sri Bhagavan Danvantari, an Avatar of Vishnu, revealed this branch of the Vedas thousands of years ago. “Old,” is not the same as “primitive,” however, and some of the instructions of the Ayurveda may remind you of modern nutritional teachings or will just seem plain common sense. 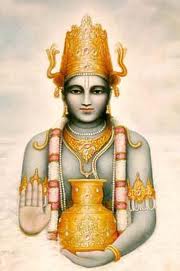 Other instructions may seem less familiar, but if given the chance they will prove their worth. We shouldn’t be surprised to see bodily health discussed in spiritual writings. After all, the human body is a divine gift—a unique opportunity for the imprisoned soul to escape from the cycle of reincarnation—and, therefore, it must be respected. The importance of healthful living in spiritual life is also mentioned in the Bhagavad-Gita (6.16-17) There is no possibility of becoming a yogi, O Arjuna, if one eats too much or eats too little, sleeps too much or does not sleep enough. One who is temperate in his habits of eating, sleeping, working, and recreation can mitigate all material pains by practicing the yoga system. Balanced and healthful eating has dual importance. Not only does it play an essential role in maintaining bodily health, but its opposite—overeating, eating in a disturbed or anxious state of mind, or eating unclean foods—is the main cause of Ama (undigested food), considered “the parent of all diseases,” according to the Ayurveda. Proper eating can also help the aspiring transcendentalist attain mastery over his senses. “Of all the senses, the tongue is the most difficult to control,” says the Prasada-Sevaya, a song composed by Srila Bhaktivinoda Thakura1, a prolific author on Vaisnava teachings, “but Krishna has kindly given us this nice prasada to help us control the tongue,” he declares. Thakura thus reveals a mystical quality of food when it is prepared and consumed in a state of devotion.

What diet is best for me?

Australian “Medicine man” and Ayurvedic herbalist, Jay D. Mulder, points out that in classical Ayurveda, determining the ideal plant-based diet is not so simple. “There are two essential qualities of food described, para (superior) and apara or (inferior). These two qualities are not discussed in Western versions of Ayurveda. Understanding these qualities is critical to determining the ideal diet for oneself. “For example, if you have good Agni (digestive fire) and the food is prepared in the correct proportions and taken with appropriate digestives like salt and vinegar, during the correct season, and at the right time of day, then a raw food diet would be considered para (superior). However, if one has weak agni or erratic Vata (air), or slow digestion (mandagni) typical of kapha, then raw food is generally apara (inferior). However, if the raw food is taken in sunny conditions and prepared and seasoned to make it easy to digest then raw food again becomes para. It is absurd, criminal and totally irresponsible for raw food proponents to push an uncooked plant-based food as the only diet for all people and all circumstances. Similarly, it is equally unjustified for some Ayurvedic practitioners to assert that food should never be consumed uncooked. The Vedic philosophy of Achintya bheda abheda tattva or (inconceivable oneness and difference in all truth) as expressed in the Ayurvedic para/apara concept, perfectly places the raw plant-based diet as both superior and inferior based on time, place and circumstance. Jay Mulder concludes, “The goal of classical Ayurveda is tridosha or balancing the three faults or doshas, and this is non-different from the ultimate ideal of yoga. Food yoga requires us to highlight the ideal of balance and how to convert apara to para.” Source: FOOD YOGA – Nourishing Body, Mind & Soul Footnote: 1. Bhaktivinoda (1838 – 1914) was among the first Vaishnava scholars to present the teachings of Caitanya Mahaprabhu and the principles of Gaudiya Vaishnava Theology to the English-speaking world.

Food yoga is both an art form and a science

ART: The individual expression of love and devotion using food as the medium; SCIENCE: An appreciation for the beauty and interconnectedness of all things, coupled with an unceasing awareness of the Energetic Source from which all things emanate.

Visit the FOOD YOGA website for more information on the Ayurveda.